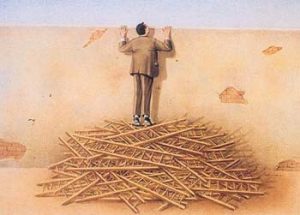 Once upon a time, a king puts a huge rock on the road leading to the palace and he sits down at the window to watch by-passers and just to see what would happen…

All the richest merchants, most influential caravaneers and palace attendants arrive one by one throughout the day. All of them get into the palace by just walking around the rock. Many of them talk against the king aloud. “He imposes exorbitant amounts of duties on his people but he cannot have roads clean”. And later a peasant comes up. He brings vegetables and fruit to the palace. He gets his basket down and puts both of his arms around the rock and pushes it with great efforts. He finally gets sweated, but he manages to get the rock aside the road. When he almost gets his basket back onto his shoulders, he finds out that there is a small cloth bag and he opens it and sees that it is full of gold. And there is also a note inside it. “This gold belongs to the person who gets the rock out of the road.” says the King.

The peasant has taken a lesson of which we are not aware even today.

Even though the language can be a hindrance for anyone who wants to take place in the international arena, this is, on the other hand, an opportunity which may lead you to new horizons.

There we are at your service to help you take advantages of such hindrances.